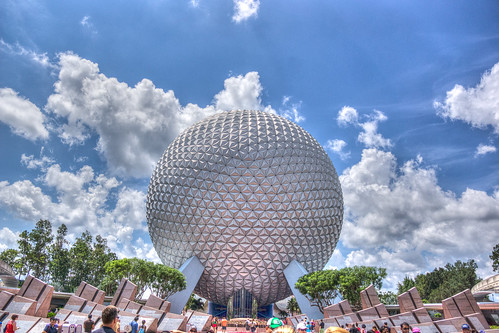 Everything, they say, is bigger in America. Tori Amos knew this when she penned her 1997 hit, Professional Widow, which was topping the charts in the January of that year. Yes, in the US of A, it’s got to be big. This may have been on my mind as I stood in that same month, suitcase packed, on the first step of a brand new adventure.

There, on the stair, I saw a mouse. Mickey Mouse to be precise. I was in Disney World, Florida. For millions of people, a place to spend the holiday of a lifetime. For me, a new place of work, and a place to call home. Work was to be Epcot Centre, by the shores of a man-made lagoon, at the Rose and Crown Pub. Alongside my fellow “cast members”, I would be welcoming and serving guests from around the world, serving warm beer and fish and chips and explaining that, thank you for asking, but I didn’t know the Queen. To our left around the lagoon, Canada. To our right, France. Don’t ask why they weren’t next to each other – this is a world in which cricket is a talking insect. Eleven countries in total, including Japan, Norway, France, Italy, China and Mexico. French cast members in France, Italians in Italy. “Authentic”, and yet surreal.

And just like in the fairytale, we all lived together. I’m not sure if you remember the fairytale in which fifteen hundred people from eleven countries, mostly in their late teens and early twenties, live alongside fifteen hundred American college students? It’s a good one. Sadly this isn’t the place to tell of the nightly parties, the pools, the gyms and jacuzzis, or the real sense of international camaraderie. That will have to wait for another story on another day.

For now, two memories. The first is of a company which to this day I hold in the highest esteem. Disney believes that if you look after your people, they will look after your guests. It works. We didn’t battle through the Florida heat to work. We boarded an air-conditioned minibus. We didn’t spend the morning washing and ironing our “costume”. We received a clean one every day. We spent just half a day learning about the first simple jobs we were to perform. By contrast, we spent two whole days learning about the company, its history and its traditions. We were left in no doubt that we were part of a rich history of guest experiences which stretched back long before we were born, and would continue long after we headed for home.

The abiding memory though, is of my fellow Disney cast members. On day one, there was a knock at my apartment door. Peter, from Hull, asking if I fancied joining him and some other new arrivals for a burger and a kirk… That early evening, as we surveyed our plates (everything is bigger in America) and pondered the months ahead, we spoke of our excitement, our nervousness, our anticipation. The people around that table, and many more, became what I now know are friends for life. We speak often, meet regularly, spend time with each other’s families. Of course we’ve changed. And yet we haven’t. We talk of  our latest news, our plans for the future. From time to time, of course, the conversation rewinds and we’re back in Florida. We’re in the Castle Tavern or driving to Spring Break. We’re laughing backstage or singing in the early hours. We’re walking through the dimly lit theme park, after work, the music still piping through the trees, the fireworks fading. Pinching ourselves. Did we really spend that time in the happiest place on earth, having the time or our lives? Yes, we did.

I’m hugely grateful to the Walt Disney World Cultural Representative Program (still going strong if you know someone looking for an experience). It stirred in me the love of meeting people I don’t know from around the world and of playing a part in a professional, fun production. Most of all I’m grateful for the people it brought into my life.

In twenty years time, I’ll be looking forward, I hope, to my sixtieth birthday. Just imagine if, today, you were on the threshold of meeting a whole new group of people who would change your life. That idea makes people want to start new things, to plot new adventures. The six months I spent at Walt Disney World were unforgettably special and could never be repeated. As the Beatles recalled, it was twenty years ago today. The best thing, I suppose, about life-changing experiences, is that they stay with you forever.

“Twenty years from now you will be more disappointed by the things that you didn’t do than by the ones you did so. So throw off the bowlines. Sail away from the safe harbor. Catch the trade winds in your sails. Explore. Dream. Discover.” Mark Twain