Welcome to my site and thank you for visiting. The quickest way to send me a message is by clicking here. For testimonials about my speaking, facilitating, moderating and presenting, please see here.

My love in life is making valuable connections between people and ideas. I have helped to start numerous ventures, working with brilliant people to fulfil their potential. A few examples include Tenner (the UK’s largest enterprise competition, run by Young Enterprise), StartUp Britain (launched by the Prime Minister), WebMission and a series of other privately organised trade missions (to the US and India, run with the Long Run Venture), Volunteer It Yourself (the award-winning project, helping young people fix their own youth clubs, run with a range of partners, including Wickes) and Cospa, the award-winning social innovation agency.  I also like to deliver things, so remain involved in several of the ventures I have started.  I regularly host and MC events (which helps me to meet great people).

Oli Barrett is a serial founder who enjoys making useful connections between people and ideas. He created Tenner, the UK’s largest schools enterprise challenge, in which over 250,000 pupils have made money and made a difference in a month, starting with just ten pounds. He co-founded Volunteer It Yourself (VIY), the social venture, which has helped thousands of young people to fix their own youth clubs. He is also the founder of TOTS (Turn on the Subtitles), the children’s literacy campaign. His first job was at Walt Disney World in Florida, and his first experience in television was working on the launch of Bob the Builder. He co-founded The Rainmakers (an innovation and incubation company) in 2004, which continues to operate out of San Francisco. From 2008, he co-created and led eleven international trade missions (including WebMission and the Clean and Cool Mission), to help companies succeed overseas. In 2011, he co-founded StartUp Britain, launched by the British Prime Minister and funded by the private sector. The campaign led to the creation of PitchUp Britain (with John Lewis and Sainsbury’s) and PopUp Britain, with the opening of shops around the UK. Oli hosts The Lens podcast with Business in the Community, which pairs senior leaders with future leaders, to discuss the future of work. He is a regular conference and awards host, for events across education, technology and entrepreneurship. He is on the advisory boards of Tech London Advocates, One Million Mentors and Troubadour Theatres, and is a Fellow of impact incubator and business builder Zinc.  His latest venture, The Connector Unit, founded in 2016, forges valuable and creative connections across a range of sectors and industries. 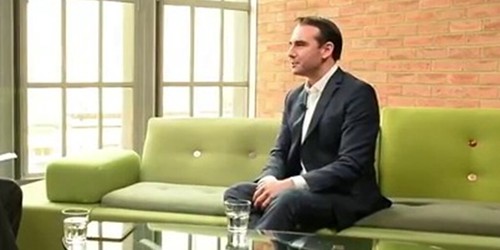 “The man who introduced Speednetworking to the UK is a force to be reckoned with. The “most connected man in Britain” has a passion for creating “quality connections” between people.” The Independent

“The former Butlins redcoat’s raison d’etre is connecting likeminded people – and he does it with a smile and grace second to none.” Elite Business Magazine

“The man who has made it his mission in life to make others think about becoming entrepreneurs…Barrett is almost as well known in tech circles for his absolutely terrible jokes as his endless enthusiasm for inspiring others.” Evening Standard

Thank you for visiting and please don’t hesitate to get in touch! (During WebMission to Bangalore and Delhi)

Please also see above for the more official stuff.

“After college, I worked at Disney World in Florida for six months.  It sparked in me a love for meeting people and enjoying work.  I went off to Edinburgh University, where I loved the city, but didn’t love the course (French and Spanish).  So I left after a term, and in the spirit of taking a few unusual decisions, went to be a Butlins Redcoat and work at a children’s TV company.  I then went to Leeds University on a far more practical (BBC-trained) course in Broadcasting.

When I wasn’t studying, I appeared in, and then produced a stage musical and a spoken-word radio show.  They gave me the bug for starting things. Also at Leeds, I started my first business, which was a bit of an alternative to the careers fair, organised by students for students.  With support from Saatchi and Saatchi, we ran events in nine cities.  Ultimately the business didn’t work out, however by that time, I had met someone (Ben Way) who I would go on to found several projects with, including The Rainmakers (a consultancy), SockRush (a sock subscription company) and FriendsAbroad (a language practice webite).

I moved to London and read about a national enterprise campaign, which I offered to help.  Enterprise UK became a great partner, and with them, I  took the speed-networking events (which I’d been hosting for fun) to a national and then international level.  This helped me to meet literally thousands of interesting people, and little by little people started approaching me, to get involved in a range of projects and opportunities.  By this time, I had been asked to speak in a few schools about what it was like to start something.  Leaving a school one day (and frustrated by how passive the whole ‘speaker-audience’ thing was) I read about a vicar who had handed his congregation ten pounds each, and encouraged them to see what they would turn it into.  It gave me the idea for what became Make Your Mark with a Tenner, which launched by handing 10,000 school pupils a tenner.

Tenner (which is still going, run by Young Enterprise) meant that I was invited to join something called the Council on Social Action (chaired by the then Prime Minister, Gordon Brown) at Number 10. Essentially, it was about the idea that Governments can’t solve problems on their own.  Neither can companies, or charities.  The group brought together a diverse cast of characters, from Tim Smit (creator of the Eden Project) to the UK Managing Partner of Accenture.  The experience convinced me that this bringing together of ‘unlikely alliances’ was both exciting and important.  We hosted an ‘away day’ and each of us brought a guest.  My guest was Tim Reading, who went on to be my business partner in Cospa my current business.  If Saatchi and Saatchi create great ads, we want to create great projects, funded by brands, which are good for business and also make a difference.

Over the years, I’ve organised a number of overseas ‘missions’, taking British companies on week-long trips to grow their businesses.  In 2011, the man who had been the Prime Minister’s enterprise adviser resigned.  His name was Lord Young and I wrote to a few colleagues, suggesting that we go and see him for coffee.  The eight attendees at that meeting became the founders of StartUp Britain, a national campaign inspired by StartUp America.  Lord Young suggested in that first meeting that we meet his colleagues in Downing Street and less than a month later we were presenting our ideas inside Number 10.

On a personal note, I’ve always enjoyed hosting events and often find myself presenting or facilitating.  I love great quotations and some of my favourites are here.  I want to work on more international projects.  I would like to work on more TV-related projects and enjoy interviewing people.  I love making useful introductions.  I believe that creativity and problem solving are fuelled by connections between often wildly different people and ideas and I want to help create projects which embrace this.  Typically, I’m in my element at either end of the creative process.  Either right at the start, bringing people and ideas together, or on delivery day, seeing good ideas put into action.

Although I need to get better at keeping in touch,I love meeting new people, especially those who believe, like me, that life is short, that business can make a difference and that work can be great fun.”

Please write to me here.